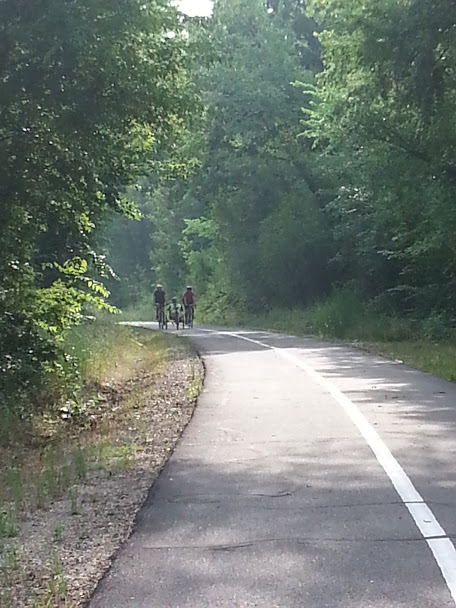 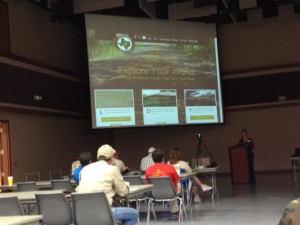 Supporters of the Northeast Texas Trail met Friday afternoon at the Love Civic Center to discuss completion of the trail.

Lunch was provided before the meeting by the Lamar County Chamber of Commerce and Friends of the Trail.

Lamar County Judge Chuck Superville opened the meeting, thanking those involved for their support and cooperation. There were several topics of discussion, including updates on the NETT website and the legal background of the group.

Chris Jones, who recently traveled the trail from Farmersville to Ladonia with his family, also gave a presentation of his experiences.

NETT president Earl Erickson explained the purpose of the group before the meeting.

“We’re an advocacy group that supports this trail construction,” he said. “And we work closely with the seven railbanked agencies that have the deeds to the corridor.”

Currently, the trail stretches 130 miles, from Farmersville to New Boston. When completed, it will be the longest hiking, biking and equestrian trail in Texas and the fourth longest in the nation, Erickson said.

“We’ve got almost eight miles developed here in Paris, between Paris and Reno, and we’re extending another five miles through the City of Blossom,” Erickson said.

The trail can be used for non-motorized transportation only, so bicycles are welcome.

The construction is part of the “Rails-to-Trails” project. Due to a federal law known as The National Trails System Act, land for the project is provided at no cost.

Through this act, the land becomes what is known as “rail-banked,” which is when a railroad company voluntarily sells, donates or leases unwanted rail lines and tracks to a qualified public or private entity.

However, according to NETT board member Keith Shelton, the rail-banked corridor is not considered to be abandoned. Before construction of the trail, trail managers sign a document saying they understand that the railroad could re-occupy the space.

“It is ‘in the bank,’ and if the railroad ever needs it back, all they’ve got to do is file to the Service and Transportation Board … to put that corridor back in use, and they get to,” Shelton said.

But fewer than 1 percent of rail-banked corridors are ever converted back to railways, so the likelihood of this trail being reclaimed is unlikely, Shelton added.

As of 2011, more than 16,000 miles of trails were built onto former railroad corridors. This trail is fashioned after the longest “rails-to-trails” project in the country, Erickson said.

“We’re modeling our trail after the KATY trail in Missouri, a rail-banked corridor that was developed by the Missouri Parks and Wildlife Department into a hike, bike, and equestrian trail and has been successfully used for 20 years,” Erickson said.

“It’s 250 miles. It goes from St. Louis through the heartland of Missouri. It follows the Missouri River [and ends] about 50 miles short of Kansas City,” he said.

The benefits of the trail are apparent in the contiguous communities, Erickson noted. Not only are they safe and a great place to exercise, they also enhance the communities economically.

“The longer a trail is, the farther people come to use it; and the longer the time they spend in the area of the trail, the more money they will spend there,” Erickson said. “Tourism and economic development are big, especially for this 130-mile trail.”

Additionally, the trail can promote community improvement for the local citizens.

“We’re tying the trail into the Paris ISD’s Safe Route to School program and the City of Paris’s Parks, Recreation and Open Space Master Plan” Erickson said. “The trail is … a backbone for both projects.”

While the trail is currently undergoing construction, citizens can do their part by getting others involved, Erickson said.

Not only does it encourage and promote a healthy lifestyle, it helps to preserve the Texas wildlife and heritage, he said. Word-of-mouth plays a large role in how many people visit each year, and hopefully, completion of the trail is not too far in the future, he said.

“The goal is to clear and grade where necessary by the end of next year,” he said. “We’ve got several portions of the trail that are already cleared, graded and surfaced like in Paris.”

Information on the project is available at www.traildeparis.org or www.northeasttexastrail.org.

By Courtney McNeal, eParisExtra
Original article can be seen on eParisExtra.com

History of the NETT Partner with Us Visitors Guide and Maps